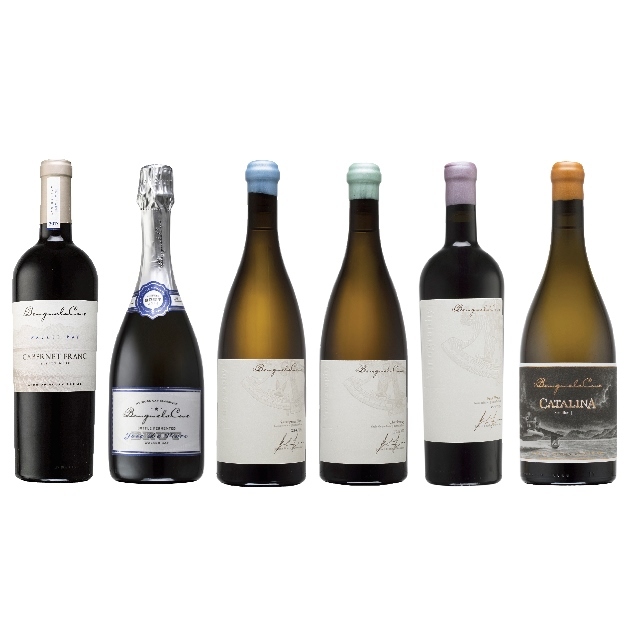 6 Bottles | R2440
- Estate Cabernet Franc 2017 - the quintessential balancing act of fruit, tannin and acidity
- Joie de Vivre 2017 - Benguela Cove’s flagship Méthode Cap Classique
- Vinography Sauvignon Blanc 2018 - fruit is the hero, honoured by the smart use of oak
- Vinography Chardonnay 2018 - stately and profound, the fruit purity is perfectly balanced
- Vinography Petit Verdot 2017 - this wine is the epitome of class
- Catalina Semillon 2018 - endless and romantic, allures with complex aromas
*
LIMITED RELEASES
*
VINOGRAPHY
The Story
Vinography represents a journal kept by both nature and winemaker on the Benguela Cove Wine Estate where they join forces in showcasing the essence of a place. Each element, nuance and decision from vine to cellar became instrumental in telling the story of a vintage. This range serves as an ode to our journey to learn and to discover the vines that were planted in virgin soil and to continue our commitment to excellence.
*
CATALINA
The Story
The Benguela Cove Catalina Semillon is made from a single vineyard and celebrates
exceptional quality while honouring the history of the land on which Benguela Cove is
built. The wine is named after the long-lived Flying Boat that was on lease to the RAF
(Royal Airforce) and operated from the Bot River Lagoon during the Second World
War. The Catalina was used for coastal patrols and aerial support of the Allied
convoys carrying supplies between Europe, Africa and the East. The Lagoon was set
up as an advanced emergency base in February 1943 and remained in full operation
until February 1945.

When the Allied Forces sailed past the Cape of Storms, up to three Catalinas
operated from the Lagoon. Of the fourteen RAF men stationed at the base, three
married South African women and returned to South Africa after the war. As abiding
as its namesake, this Semillon has an ethereal quality with incredible ageing potential
that evokes a sense of nostalgia. It was made to be remembered.

JOIE DE VIVRE 2017 MÉTHODE CAP CLASSIQUE
The Story
A classic, elegant MCC made from Chardonnay and Pinot Noir. The French translation
of the name - the exuberant enjoyment of life – is exhibited in its vibrant intensity.
Aromas of nougat and brioche etch its limy character. Lingering mineral tones
complements the fine mousse with aromas of red apple and nutty flavours lingering
on the palate.